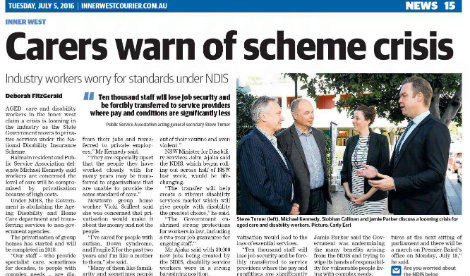 A warning from local carers

Mr Parker met with constituents who work in the Government’s department for Aging, Disability and Home Care (ADHC) to discuss their concerns about the forthcoming abolition of the department under the NDIS.

“Our staff – who provide specialist care, sometimes for decades, to people with complex needs – are distraught at the idea that they may be forcibly removed from their jobs and transferred to private employers,” said Michael Kennedy, a Public Services Association spokesperson, Balmain resident and ADHC employee.

“They are especially upset that the people they have worked closely with for many years may be transferred to organisations that are unable to provide the same standard of care,” he added.

“Under the guise of the NDIS, the government is proposing to stop providing ageing, disability and home care services, instead transferring these services to NGOs and private companies. People with disabilities, who are supposed to have more choice under the NDIS, are now unable to choose the government as their care provider.”

In addition to the serious impact on people living with disabilities, Mr Parker heard that ADHC staff are facing 20% salary reductions and fewer employment protections as they are forced into jobs in the private sector or not-for-profit organisations. 40% of ADHC workers surveyed recently said they will leave the workforce altogether rather than move to private sector with worse conditions and no job guarantees.

“We could be seeing a situation in some areas where young people living with intellectual disabilities, for example, are forced to live in aged care homes,” said Steve Turner, a constituent of Mr Parker and Assistant General Secretary of the Public Services Association.

“Potentially every single person who accesses a disability service will be affected by the privatisation of ADHC - it will lead to the loss of essential services and a lack of choice for them and their carers.”

“The State Government is undermining the many benefits arising from the NDIS and trying to wipe its hands of responsibility for extremely vulnerable people living with complex needs,” said Mr Parker. “The government must stay in this sector and ensure that their standard of care does not go down after privatisation.”

“This move will lead to a shortage of qualified staff in the disability and aged care sector in New South Wales, meaning that essential services simply cannot be delivered. As one of the most vulnerable and important groups in our community, I believe that people living with disabilities – and those who work to support them – deserve better than this.”