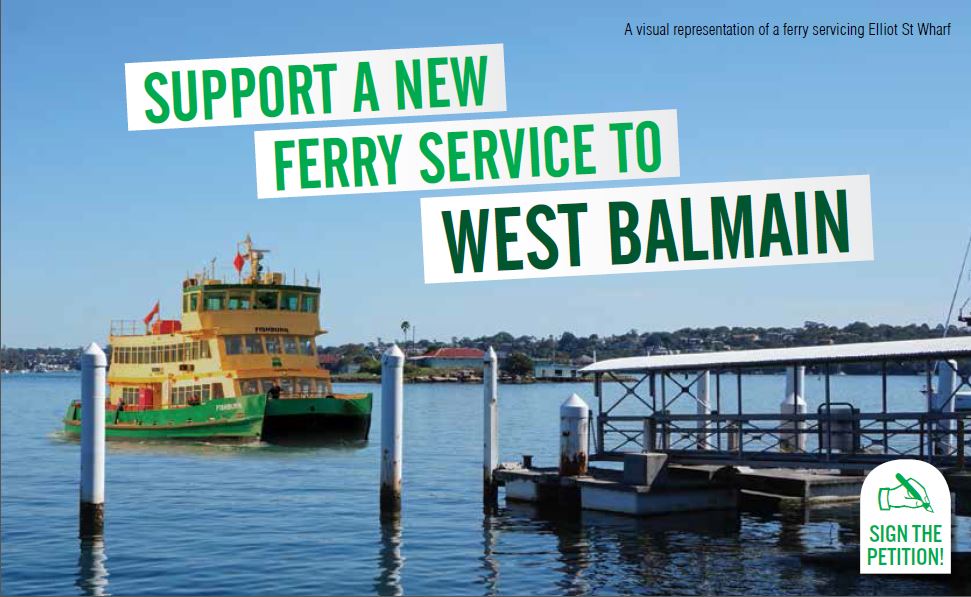 In 2013, the government shut down the Elliott Street ferry wharf claiming it was under used. With more developments, residents and cars in the area, locals are calling on the government to reinstate services to West Balmain.

Commenting on the campaign, Jamie Parker MP for Balmain said:

“It’s been five years since the government decided ferry services to West Balmain were under used and shut this wharf down. Since then we’ve had hundreds more people move into this area demanding clean, affordable and convenient transport options.

“We have hundreds of new residents almost sitting on top of this wharf who want to bypass the hassle of Darling St and the Anzac Bridge by jumping on a ferry.

“Increased traffic movements from WestConnex and the Western Harbour Tunnel project are only going to exacerbate the choke points along Victoria Road at Darling Street and White Bay.

“Why force the residents of West Balmain to contest with traffic when the ferry infrastructure at the end of Elliott Street is built, paid for and already operational.”

“More apartments and developments are popping up in this part of Balmain every day. There are a lot more people in our area and we need better transport.

“Getting along Darling Street in the morning is slow, especially if you’re travelling to the city. A ferry at Elliott Street would give local residents a different avenue to get in and out of the peninsula without clogging up Darling Street. The ferry is also just a really beautiful way to get to work.”