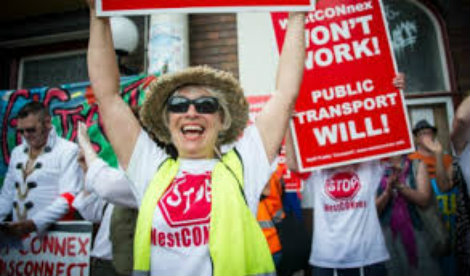 Greens MP for Balmain Jamie Parker has reiterated his call to scrap WestConnex and criticised the latest proposal for a tunnel site near Leichhardt Senior High School as a ruse designed to divide the community.

“It’s clear that Sydney Motorways Corporation is simply putting up two equally unsuitable options to split the community. Both the school and the previously proposed Darley Road site are patently unacceptable.

Council commissioned an independent engineer who identified a site on the western side of the light rail precinct as potentially more suitable for this purpose.

SMC should further investigate this option, rather than planning on the run and putting forward ridiculous straw man proposals designed to divide the community and pit one side of Leichhardt against the other.

We’ve been working on this issue for over seven months with local community group Leichhardt Against WestConnex and the government refuses to see the clear folly of these proposals. Residents are highly concerned about the traffic and safety impacts both on residents and across the inner west region.

Leichhardt Against WestConnex has highlighted that the Derbyshire Road site acquisition will affect bus operations and raise health and safety issues for bus drivers. They are concerned that a site here would involve the movement of heavily contaminated soil, greatly impact the use of Balmain Road for those accessing or crossing the City West Link and place students traveling by car, foot and bicycle at risk.

They also have equally serious concerns with a site on Darley Road, which has long been acknowledged by Council as traffic black spot and highly congested.

SMC are proposing a four year occupation of either site with hundreds of movements of heavy vehicles, spoil trucks and contractor vehicles.

I will be meeting with SMC to let them know in no uncertain terms that neither of their divisive proposals is acceptable to the community. A tunnel site by the school and a tunnel site on Darley Road are both appalling proposals.

This is yet another example of the kind of planning on the run which has been characteristic of the WestConnex project since the start. The whole project should be scrapped, as this latest development once again shows.