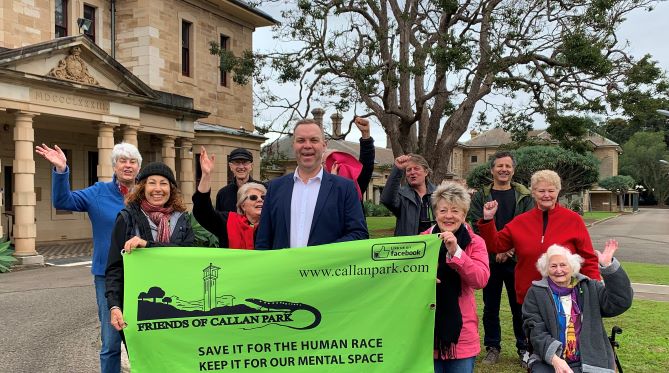 We WON $10m for Callan Park

I am pleased to join the Minister at Callan Park to announce that we have secured an immediate $10 million funding commitment for the site.

This record $10 million funding will be used to deliver the Landscape Structure Plan which aims to make Callan Park a more beautiful and useable space by restoring heritage buildings and landscapes.

Callan Park will be placed in a newly formed Greater Sydney Parklands agency alongside world-class sites like the Centennial Parklands.

For those of us who attended the very first Callan Park rally way back in 1999, this is a long awaited and historic win.

Today's funding announcement exceeds anything promised or delivered by Liberal and Labor Governments over the past 20 years! It almost doubles what was pitched by NSW Labor before the 2019 State Election but will not permit the commercialisation of Callan Park as their proposal did.

While the new agency is yet to be tested, I am absolutely committed to ensuring that Callan Park is given priority within the Greater Sydney Parklands and that heritage restoration is accelerated within the Park.

Importantly - this will not affect the Callan Park Act which remains in place as a protection against any future government developing, commercialising or privatising this site.

Thank you to everyone who has rallied behind this campaign for the past twenty years. I especially want to acknowledge the work of the Friends of Callan Park who formed back in 1998 in response to the then Labor Government's first attempt to develop the site.

Thank you to all the members of the Friends of Callan Park who have been champions for this site. Thank you to the thousands of residents who signed our petition to protect Callan Park. Thank you to everyone who has joined me to lobby Ministers and government officials over many years.

Putting Callan Park in the Greater Sydney Parklands agency in the company of sites like the Centennial Parklands recognises that this beautiful park has always been one of the great parklands of Sydney. This is the first time in 20 years a government has committed to giving something to Callan Park rather than taking something away.

While this is all welcome news, we're still calling on the government to deliver a Callan Park Trust - sign the petition here.

Pictured: Jamie Parker MP with the executive of the Friends of Callan Park - July 2020