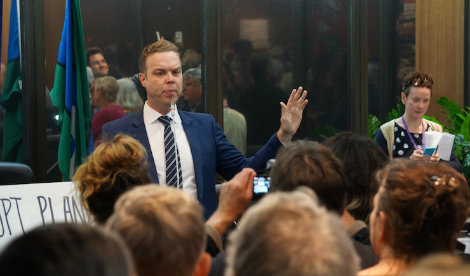 Council runs up against SMC arrogance

The government-appointed Administrator of the Inner West Council, Richard Pearson, admitted at last night’s council meeting that his approaches to the Sydney Motorway Corporation have been met with complete intransigence, with the SMC effectively stonewalling Council.

“The SMC has shown clearly that they are not prepared to negotiate in any way on even the most basic issues of resident’s safety. The Administrator stated publicly last night that he was extremely disappointed with their responses, and that in fact so far he’s got ‘nought out of ten’ on Council requests. This is appalling but not surprising,” said Greens MP for Balmain, Jamie Parker.

“Baird’s own hand-picked Administrator is being bulldozed - just like the residents of the Inner West - by this private company, set up by the Liberal Coalition government to ram through the tollroad at any cost and to operate outside the normal planning requirements of local and State government.”

“The SMC has brazenly refused to apply to the RMS regarding Council’s proposal for a School Zone along Campbell Street in St Peters, because it is concerned that this may slow traffic along the street.  This shows a shocking disregard for our children’s safety.”

“Council’s request to the SMC regarding truck movements onto Wattle Street and Dobroyd Parade has not been acted on, even though this is one of the Conditions of Consent and was cited as a ‘serious issue’ by Richard Pearson.”

“The Inner West Council also requested access to the relevant WestConnex traffic modelling in order to investigate the impact on local traffic in St Peters and Enmore, but this request was simply refused by the RMS.”

“As the secrecy and lack of transparency of this project continues, you have to ask: how can the Premier honestly allow the RMS and the SMC to operate in this manner?”

“Baird’s own Administrator has got nought out of ten for his proposals and stated that ‘this is a sign of their intransigence’.  This situation doesn’t bode well for residents in the Inner West, as the M4 east and the new M5 works are being fast-tracked through right now.

“There’s no rule of law here  - what we are seeing is a private company running roughshod over our community and even over State government-appointed representatives.”