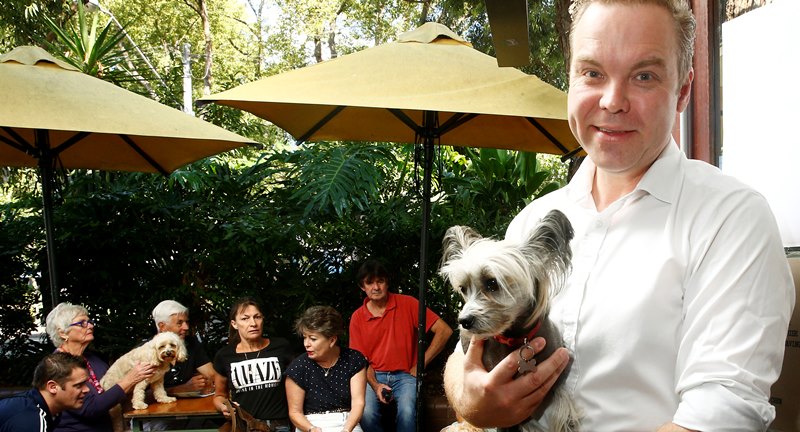 I'm proposing an amendment to current laws excluding dogs from pubs to give the owners of pubs the right to decide whether dogs are allowed into indoor areas.

See my proposed amendments to the legislation here

What’s the situation with dogs in pubs at the moment?

Having a drink with your dog has long been a feature of life in Balmain. Several local pubs, such as the London Hotel, have always welcomed well behaved dogs along with their owners, and the presence of dogs is a much loved part of these pubs’ unique atmosphere.

Recently, however, local residents claim council officials have visited puts and let owners know there will be a $600 fine for bringing dogs inside pubs.1

The Inner West Council has stated that they are simply enforcing the NSW food authority guidelines and the provisions of the Food Act, which prohibits dogs in indoor area where food or beverages are served.

Many believe that there’s a strong argument for changing these restrictive laws to allow dogs to accompany their owners to a pub as they do in the UK and in many parts of Europe.

In our local Inner West area and in many country regions, dogs are part of the community and accompany their owners everywhere. Being able to bring dogs into the local pub would enhance the quality of life not only for dog owners, but for dogs too.

A 2015 La Trobe University study surveyed more than 2,300 Victorians and found 63 per cent of dogs were not walked daily and many pets were left alone for long periods of the day.

The study's lead researcher Dr Tiffany Howell agreed with Queensland RSCPA that Australia was restrictive compared to other parts of the world.

She said that only 26 per cent of people took their dog on "an outing" once per day, and 17 per cent did it less than once per week.

RSPCA Queensland spokesman Michael Beatty said compared to overseas, it was hard for Australians to spend time nurturing their pets.

"In England or Scotland or New York [for example] they are always getting exercise because they go everywhere with their owner," he said.

"In Australia they can't go everywhere with their owner, like a pub ... They can in Europe and most parts of America and the UK."

What’s the law in NSW?

Section 14(1)(b) of the Companion Animals Act 1988 2 provides that dogs (other than police dogs, assistance animals and corrective services dogs1) are prohibited in:

Additionally, s 14A(1) states the “relevant legal restrictions” (specifically, s 14(1)(b) of the Companion Animals Act 1998, the Food Act 2003 and the Food Standards Code) do not prohibit a dog (other than a dangerous, menacing or restricted dog) from being in an outdoor dining area if:

(a) the dog is under the effective control of some competent person and is restrained by means of an adequate chain, cord or leash that is attached to the dog, and

(b) the person does not feed the dog or permit the dog to be fed, and

(c) the dog is kept on the ground.

What’s the Commonwealth law on dogs in pubs?

Standard 3.2.2 - Food Safety Practices and General Requirements cl 24(1)(a) of the Food Standards Code (administered under the Food Act by Food Standards Australia New Zealand) provides that a food business must not permit a dog (other than an assistance dog) in areas in which food is ‘handled’. The ‘handling’ of food is defined to include ‘serving’.

The legal definition of food includes drink. Hence, a pub where only drinks are served is still legally considered to be a food business.

Is there a health risk in having dogs in pubs?

A comprehensive risk assessment3 was prepared by Food Standards Australia New Zealand as a supporting document for the 2013 change in Commonwealth legislation that allowed dogs into outdoor dining areas.

Here are some extracts from this risk assessment:

Adherence to good hygienic practices in food preparation and service, maintenance of cleanliness, and proper pest control by food businesses should contribute to the minimisation of any potential risk of foodborne transmission of pathogens potentially carried by companion dogs in outdoor dining areas…

Since dogs in outdoor dining areas pose almost no threat to food safety or health, it’s hard to see why simply being indoors would substantially increase the risk to humans from dogs’ presence. If anything, since dogs are house trained, the already negligible risk of contact with dog faeces would be lessened still further.

What’s the situation with dogs in pubs in the United Kingdom and Europe?

Australia is regarded as one of the strictest nations when it comes to accessibility for companion animals.

Dog-owners in many European countries are free to take their pets inside shops, cafes, restaurants and onto public transport.

Dogs are allowed in indoor dining areas in the UK. The only legal obligation on the owner is to make sure there is no risk of contamination and that all food preparation areas are up to specified hygiene standards.

The law does not specify excluding animals from areas where food is ‘served’.

Food businesses are responsible to ensure their own food safety management procedures identify and control risks to food hygiene such as having adequate procedures in place to prevent domestic animals from having access to places where food is prepared, handled and, or stored. The Local Authority is the competent enforcement authority for food businesses and they should be satisfied that the food business has adequate controls in place to prevent the risk of contamination.

Whether or not to allow a pet dog into the public areas of a food business is a matter for the individual food business operator to decide. Some businesses may have a “no pets” policy; others may welcome well behaved dogs in public areas.

Local councils would typically advise food businesses that dogs may not be permitted to enter those parts of premises where food safety could be compromised, that is areas where food (including ingredients) is stored, handled, prepared, or cooked - ie those areas where a customer would not be expected to gain access to either.5

What’s the next step?

The first step would be to amend the legislation in New South Wales to allow dogs in indoor as well as outdoor spaces, provided they are kept away from areas where food is prepared or stored and subject to the policy of the owner of the business.

The second step would be to propose another amendment to the Food Standards Code to extend the regulations to allow dogs in indoor spaces as well as outdoors, subject to the same provision.