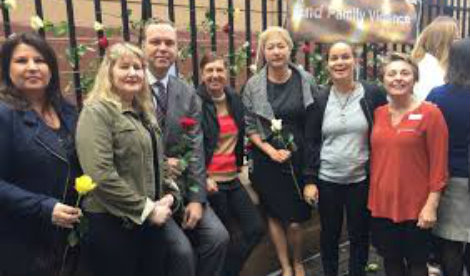 In a welcome move, the NSW Government on Thursday committed to twelve months’ funding for an essential, specialised domestic violence service which was threatened with imminent closure.

The Women’s Family Law Court Support Service has operated for over a decade and each month helps more than 100 victims of domestic violence with support and case management. Due to an impasse between the federal and state governments, the service would be forced to close later this month.

Member for Balmain, Jamie Parker MP, took the issue directly to the Minister for Family and Community Services in Parliament, asking the Minister if he agreed with the Chief Justice of the Family Court about the importance of the service.*

“This service has demonstrated the very practical assistance it provides abused women as they face the Family Law Court and attempt to rebuild their lives. It was unacceptable that a stand-off between the State and Federal Governments over a relatively small annual amount of $82,000 would result in the service shutting its doors on vulnerable women,” said Mr Parker.

“Despite the strong statement of support from the Chief Justice, I was aware that the public response to date from the State Government had been less than encouraging.

“Recent media reports (SMH 29/1/16 and SMH 28/2/16, campaigning from SOS Women’s Services, emergency assistance from Marrickville Women’s Refuge, and a joint proposal from Leichhardt Women’s Community Health Service had not been enough to reverse the funding impasse.

“I congratulate the Minister and his staff for bringing forward this funding commitment. This makes a tangible difference to the lives of many women and children,” said Mr Parker.

"The service helps hundreds of women each month from across NSW through what is often the most traumatic time of their lives. We're extremely pleased Minister Brad Hazzard has supported the Chief Justice and saved such a valuable service for victims of domestic violence,” said Ms McMurray.

*The Question Without Notice asked to Minister Hazzard by Jamie Parker MP, Member for Balmain:

Considering the full funding cut to the important domestic violence work of  the Women’s Family Law Support Service  does the Minister agree with the Chief Justice of the family Court who said ”to lose this service for women in need is a sad indictment when governments, both state and federal, are committed to assisting families that have experienced family violence.”