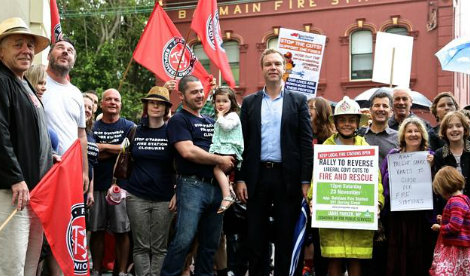 The Greens can reveal the huge new average cost to the people of the Balmain electorate from the Government’s new Fire and Emergency Services Levy Bill.

According to an analysis carried out by the Fire Brigade Employees Union, in the electorate of Balmain property owners will have to pay an average property tax of $454 - almost two and a half times the $185 that the Government said would be paid. Some households will pay substantially more.

Commenting on the findings, Jamie Parker, MP for Balmain, said:

“This legislation, recently passed by the government, offers a billion-dollar gift to the big insurance companies. This windfall will be paid for primarily by ordinary homeowners across our area.

This bill removes a tax on insurance companies and transfers it squarely onto ordinary residential property owners. It’s a result the big insurers have been after for years.

Ordinary people are being told that not only should they pay for their home insurance, they should pay a separate tax for the fire brigade to further bolster the profits of insurance companies.

The shortfall will be made up primarily by residential landowners in Sydney, many of whom are already next to financially crippled by paying their mortgages.

This new law makes homeowners pay 58% of the tax and businesses only 47%, although businesses account for 55% of emergency service callouts and residential properties just 34%. This means that the residential sector will pay almost 60% more than their fair share.

Why are fire services being treated differently to ambulance and police services? Core services including ambulance, police and fire services should be provided by consolidated revenue in New South Wales, and paid for largely by the insurance companies, who get the benefit of these services.”