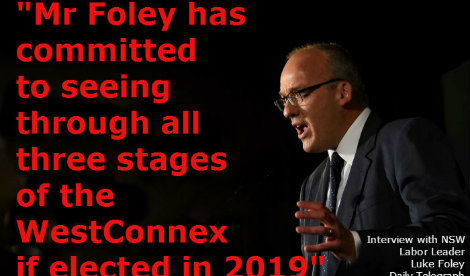 It’s disappointing that Labor has now committed to all three stages of WestConnex.

The two local MPs are calling on the community to re-double their efforts campaigning against it.

“Labor is now in lock-step with the Berejiklian Government when it comes to this polluting tollroad. It seems Mr Foley has made it clear today that Labor has abandoned our communities in the inner city and inner West, and is content with slugging the people of Western Sydney with tolls and congestion.

“Labor’s position on WestConnex has been slippery since the moment Anthony Albanese announced Federal funding to scope the project back in early 2013.

“In the lead up to the 2015 election Labor claimed they would save Newtown from WestConnex.  The community didn’t trust them then and today Luke Foley has shown they were right to be suspicious.

“I feel for the tireless local Labor activists and branch members who live in the inner city and Inner West and who have been an integral part of the campaign against this polluting tollroad. I give my commitment to all of the people impacted by this disaster of a motorway that we will not abandon them. We will use this foolish commitment to re-double our efforts.”

“It’s especially disappointing that NSW Labor have made their commitment to WestConnex so clear on a day when the City of Sydney has released their plan to rethink the need, shape and scale of WestConnex.

The City’s plan is a step forward in the right direction that proposes scrapping the M4-M5 link from St Peters to Rozelle.

But Labor has instead reaffirmed its commitment to a tollroad that will destroy communities, increase air pollution levels, and contribute to global warming by inducing more cars onto the roads.”