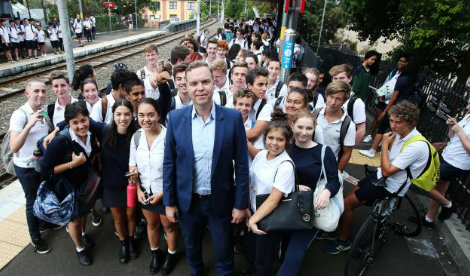 Member for Balmain Jamie Parker has delivered a speech to Parliament, calling on the government to start serious work with the community to implement an extended light rail service connecting Strathfield to the CBD via Parramatta Road and to Balmain via the former White Bay goods line.

“Yesterday in Parliament I spoke out on behalf of our community, asking the government to work seriously with us to provide a light rail link from Strathfield to the CBD along Parramatta Road.

I took the chance to publicly thank the thousands of community members who have signed petitions, attended meetings and spoken to me at my community stalls about the need for further light rail services.

As I told the Parliament today, now more than ever we need to connect and extend light rail along Parramatta Road and to Balmain.

The claim that WestConnex will reduce traffic on Parramatta Road has gone up in exhaust smoke. Contrary to the claim by the former Minister that Parramatta Road would become a nirvana, the Camperdown access ramps are to be scrapped, which means that traffic will move from Ashfield and Haberfield along Parramatta Road, not under it.

Light rail works; it must be connected. There is an opportunity to connect light rail along Parramatta Road and into Balmain. We know that the knowledge sector wants it, the business community wants it and ordinary travellers from our area and from greater Sydney want it. It is time for us to examine the opportunities in that corridor.

Light rail will work not just for the people of our area, but also for everyone who travels in and out of the city for work, shopping or a day out. With better light rail services in and out of the CBD, we can have less bus jams, more reliability and less frustrating waiting at bus stops.”