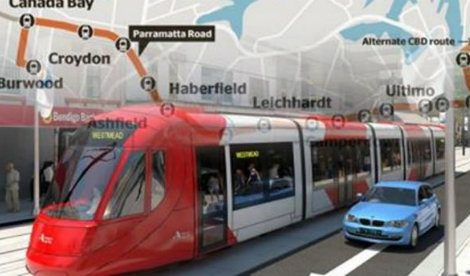 Media reports that a detailed plan for light rail along Parramatta Road has been scrapped by the government.

“Light rail is the best solution for Parramatta Road - that's why we've been campaigning for so many years to get this service. We collected over 10,000 signatures on our petition thanks to huge support from local businesses and residents. We’re still optimistic that this overwhelming community support will see a light rail service implemented on Parramatta Road.

Now the government’s own plans have demonstrated the outstanding merits of a light rail service.  Light rail will allow bus routes to be redesigned across the Inner West, so that fewer buses would have to travel east-west along Parramatta Road, so more could run north and south through the area.

Using Parramatta Road could be as easy as settling in to check emails or read a book in a comfortable light rail carriage. A light rail service along Parramatta Road would be faster than the existing bus system, more efficient and would help people across the Inner West get where they need to go faster and more easily.

Light rail can provide fast, reliable and environmentally sustainable transport. Compared with alternatives, it's cheap and quick to build.

A light rail line can carry 7,500 people an hour, compared with a traffic lane that can carry fewer than 2,000.

A joined up light rail network including Parramatta Road would be more effective than buses in moving large numbers of passengers in and out of the city.

However, what we’ve seen today is that the government is fixated on delivering profits for private road and construction companies, rather than investing in world class public transport.

The projected cost of $2.7 billion for this public transport solution is a fraction of the $16.8 billion the government is wasting on the destructive and polluting Westconnex tollway.

We’ll be taking this opportunity to build on the strong community support and step up our advocacy for light rail on Parramatta Road.

We’ll continue to press the government to invest in people and public transport, not pollution and private roads.”

“Scrapping plans for a much needed Light Rail project in favour of the wasteful and polluting Westconnex is yet another reminder of this Government’s obsession with toll roads.

“This Government’s over reliance on motorways is proving to be disastrous today and will further exacerbate Sydney’s congestion tomorrow.”