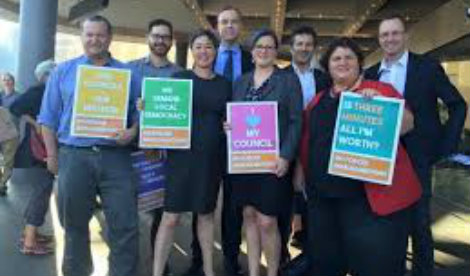 Today the Liberal government abolished our local councils and sacked our elected Councillors.
Sign and share my petition calling for a plebiscite

As a Councillor of Leichhardt Council from 1999 to 2011, and serving several terms as Mayor, I am so disappointed and particularly saddened for the staff and Councillors at the three inner west councils.

It is a disgraceful move which for 16 months will deny any elected, local government representation for 185,000 residents while the state government presses on with WestConnex, the Bays Precinct development and the Parramatta Road 'transformation'.

The state government has now installed in the new Inner West Council (formerly Leichhardt, Ashfield and Marrickville) an administrator who is a former senior bureaucrat from the Department of Planning. But let's not forget this is the preferred model of amalgamation which was proposed and adopted by the Labor and Liberal Councillors on these three councils.

Local Independents and Greens strongly argued to stand firm on a 'stand alone' option. This was the successful strategy pursued by the City of Sydney which has now emerged intact without being forced to amalgamate with another council.

We understand that the Labor Mayors of the three inner west councils had been told by the Local Government Minister, Paul Toole, last November that if their 'fall back' amalgamation proposal - to merge Leichhardt, Ashfield and Marrickville - was adopted by the state government, the Mayors would keep their job until a new election. The government essentially double-crossed them and we should all be appalled that it came to this.

Motions from Greens Councillors, and supported by Independents, to pursue legal challenges and hold a plebiscite so the community could decide were consistently voted down by a united bloc of Labor and Liberal Councillors.

The boundaries of the new Inner West Council, designed by the Labor Mayors, have been crafted to deliver a majority for Labor and a strong showing for the Liberals in the next election. For independents and smaller parties campaigning for election to a new council with 185,000 residents makes it almost impossible unless you have very deep pockets. I’m sure we will see a lot of well-funded developer-friendly ‘independents’ running in September 2017.

I want to thank all Councillors who have served our community and in particular my Greens colleagues in local government.

I still believe that a council-supported plebiscite should have been held so the community had a direct say in what happened to their council. Ultimately, residents should decide. That’s why I’m calling on every state MP to support our proposal for legislation to allow residents to vote in a binding, de-merger plebiscite in any council that was forced to merge by the Baird Government.

If a majority of residents support their council standing alone, then the law must provide for a council to be reinstated and a de-merger to occur.

Rest assured I will continue to take up the fight to the government on the major issues in our area and defend the amenity of our community.

I am committed to seeing this undemocratic, forced amalgamation reversed. If you are also concerned about what this means for our local community, sign and share my petition calling for all Members of Parliament to commit to legislation allowing residents to vote in a binding de-merger plebiscite. The community should decide the future of our council, not Mike Baird.

Join 18,102 other supporters in taking action

Kate signed up to receive updates.

Barbara signed up to volunteer for Jamie