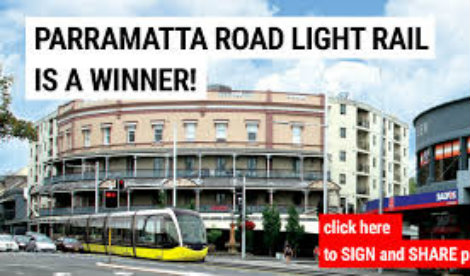 “I have questioned the Minister in Parliament, lobbied government departments, received hundreds of letters of support, and our online petition has reached more than 10,000 signatures,” said Mr Parker.

“Over the past few years we have certainly made progress, including the funding commitment in the 2014 State budget for a feasibility study of light running from the CBD to Strathfield, and construction of the CBD light rail. But now it’s time for the Government to act to ease congestion, reduce noise pollution and deliver a fast safe and reliable light rail service.

“Now the Government has decided to construct the new metro through Waterloo, there can be no excuses not to get cracking on a light rail line which can carry more than three times the number of people than one traffic lane on congested Parramatta Road.

“The estimated cost for light rail from the CBD to Olympic Park is a fraction of the cost of a motorway or heavy rail. Light rail is economically, environmentally and socially responsible – and with the university joining the campaign, the Government’s recalcitrance can’t continue,” said Mr Parker.

Jenny Leong MP, Greens Member for Newtown said: “I welcome Sydney University’s support for extending the light rail network to service the major health and education precincts in the electorate of Newtown.

“Light rail provides the opportunity to have multiple stops to service different areas of the campus and Royal Prince Alfred hospital.  At the moment, the closest train station to RPA is the Macdonaldtown Station, which does not have disability access,  is too far away and infrequently serviced.

“It is crucial that there are affordable and accessible transport options for this area, particularly for shift workers at RPA.

“Delivering Light Rail to the inner city and inner west is a much more sustainable and affordable solution than pumping billions of dollars into a polluting WestConnex,” Ms Leong said.