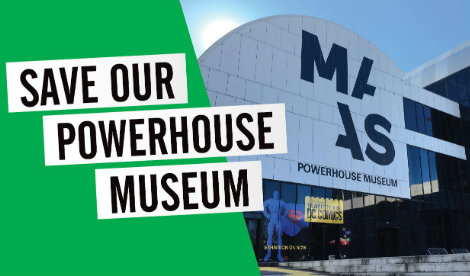 Powerhouse campaign at a crossroads

Recent news reports have confirmed the success of the community campaign for an iconic cultural facility to be built in Western Sydney without selling the Powerhouse Museum in Ultimo.

"The fact that the government is stepping away from the full sale of the Powerhouse is testament to the strong public support for the museum and for an arts policy that works for all of Sydney.

With the Cabinet set to make a decision soon, we have been ramping up our efforts to save the Powerhouse.

Thousands of people have already signed our petition calling on the government to cancel the sell off of the Powerhouse in Ultimo. Last week we launched a new Save the Powerhouse campaign, distributing tens of thousands of postcards in the local area and around Sydney.

It’s very disappointing that Labor continues to be a cheerleader for developers, demanding nothing less than the sell off of the Powerhouse Museum.

Investing in the Riverside Theatre and building a cultural facility in Parramatta should not come at the cost of destroying the Powerhouse museum in Ultimo.

There is widespread support for the retention of the Powerhouse in Ultimo. We have already seen a concerned community campaign, with public rallies, meetings and a round table summit I hosted in the NSW Parliament.

Western Sydney deserves an iconic cultural facility that reflects the spirit for that region without selling off the Powerhouse in Ultimo.

This has always been about a real estate deal to generate cash for the government rather than a considered cultural investment in Western Sydney.”