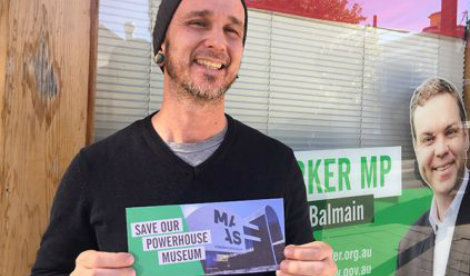 MEDIA RELEASE - May 12, 2016
Commenting on the release of documents from the Powerhouse Museum following a GIPA request, Jamie Parker MP, Member for Balmain, said it exposed the government’s agenda as being a big-ticket real estate deal that will short-change museum patrons and tax-payers alike.

“The Museum of Applied Arts and Sciences Board of Trustees were clearly given their instructions to follow a plan-by-press release, without expert input, community consultation nor any comprehensive cultural strategy,” said Mr Parker.

“By allowing Infrastructure NSW to put a financial outcome ahead of cultural priorities, we end up with the destruction of a valued cultural asset. The documents show confusion, secrecy and contradiction in relation to the future location, continuity and purpose of the Powerhouse Museum.

“Despite the obvious shortfall in funding for a relocated museum, there has been nothing put before the Board that indicates a commitment to fully fund the relocation.

“During a discussion with the Secretary for Trade and Investment on 4 March 2015, the Board heard that initial estimates of market value ranged from $130 million to $200 million. Yet Museum experts estimate it will cost at least $500 million to relocate the Powerhouse and its vast collection of exhibits.

“There is also the appalling waste of public money in selling-off the purpose-built and recently refurbished building in Ultimo.

“Considering the number of questions and concerns that must occurred to the Trustees, it is outrageous that the Secretary declared “it would be counterproductive for the Board to oppose the proposed relocation”.

“These documents reveal that the proposed sale is simply a real estate deal that will only deliver an underfunded and inferior version of the current Powerhouse. Together with the community, I remain resolved to oppose this wasteful, destructive plan,” said Mr Parker.

Read more of Jamie's work to save the Powerhouse