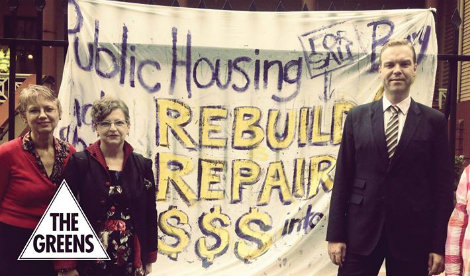 My speech in Parliament responding to the Liberal government laws to evict homeless people from Martin Place. It's heartless and no solution to the broken public housing system.

Mr JAMIE PARKER ( Balmain ) ( 12:34 ): I address the Sydney Public Reserve (Public Safety) Bill 2017. This is an issue that I have been taking up assiduously in the Parliament, the issue of what many know as public housing but what we now know as social housing. This bill goes to the heart of a structural problem in this State for which not only this Government but also the former Government can take responsibility. I draw members' attention to a report of the Auditor-General in 2013 on a systematic review of public housing in this State. The report found that this State has cannibalised public housing stock. In the 1990s we saw a pull back of funding from the Federal Government in public housing. The response of the former Labor Government was to sell public houses to fill the gap between income that is received from the State and from rents and the cost of managing the service. Up to 1,000 houses were sold every year to plug that gap.

When the Coalition came to office in 2011, the maintenance backlog had blown out to over $300 million and there was a maintenance crisis in New South Wales. This Liberal-Nationals Government has failed to address the fundamental problem that the Auditor-General described, that is, that we must invest in public housing. The State needs to invest in public housing because the maintenance backlog of over $300 million means that the State is a slum lord. The increasing lack of public housing dwellings to meet the enormous demand means that the mismatch between demand and supply will continue to become even more unbalanced.

Currently, there are 60,000 applications for public housing. That is applications, not individuals. More than 100,000 people are on the waiting list for public housing in this State. I give credit to the Government for releasing the details of the waiting lists. We can now see how long the wait is, and I have printed out the waiting lists for approved applicants for social housing and general housing. Let us look at Sydney, south-eastern Sydney and North Sydney. People in the inner west who you are looking for one-, two-, three- or four‑bedroom accommodation have a waiting time of more than 10 years. They must remain qualified for public housing for a minimum of 10 years before they are considered. In St George, Sutherland and the northern suburbs the wait is also more than 10 years.

As the local member for Leichhardt for six years and the mayor of Leichhardt before that and having been elected to Leichardt Council in 1999, I know people who have waited on the priority list for public housing for more than 15 years while remaining qualified. We tell people that we have a solution for those who are homeless but this is an embarrassment, not only for this Government but for the former Government as well. Without investment in public housing to address the mismatch that exists between supply and demand, we will never address this problem adequately.

We see people sleeping in the streets, and what is the response? My electorate office is in Glebe; there are about 1,900 public housing tenants in Glebe. The number one issue people inquire about at my electorate office is public housing. They inquire about maintenance and the disgraceful lack of investment in public housing property. Secondly, people come to my office desperately looking for accommodation. I encourage members to speak to Family and Community Services [FACS], who goodness knows are trying their best under trying circumstances. Ask them, "What do you do if somebody needs emergency accommodation?" Ring up the women's refuge in your local area and ask them, "When a woman is ready to leave a women's refuge and needs public and social housing, what do you do?" They will say, "We put them on the priority list." Over 30 per cent of social housing applicants are on the priority list and even they can wait up to 10 years for a property. In my electorate, they are put up in the nearby Marco Polo hotel, which does not have kitchen facilities in the rooms. They might stay there for a week or a couple of weeks and then FACS will try to find somewhere else for them to go.

The incredible demand often means that the client who is desperate for housing will return to their abuser or they will continue to couch surf and sleep on a friend's or relative's couch. They will do everything they can to keep going. It is clear there is no support. If there were support, people would not have to wait up to 10 years on the priority housing list. It is the same in rural and regional areas, as we can see on the Land and Housing Corporation's website. With 60,000 applications from more than 100,000 people, the department cannot cope with the demand and people are living under financial stress and in unsafe conditions. The Government talks about a billion-dollar fund—big deal. It is not building a billion dollars worth of properties; it is providing financial support for more investment in public housing. That is not enough.

I draw attention again to the Auditor-General's 2013 report, which demonstrated that until recently public housing as a proportion of overall housing tracked well. However, in the past 20 years we have seen a steep decline in public and social housing as a proportion of all housing. The lack of ongoing investment means that the mismatch continues. When I was a child, my parents were offered public housing in Doonside. My father was working class and fixed engines on ships, my mother looked after four children, and they we were offered public housing. That would never happen now. The only people who are offered public housing are those who are desperate. The Department of Family and Community Services [FACS] has to allocate housing for people who have been released from jail or have come from a women's refuge or drug and alcohol rehabilitation. They are the people they are trying to house. When there is only one property available, who do they choose?

That challenge is destroying the Land and Housing Corporation. The rents that public housing providers receive have collapsed because the only people receiving public housing are those on welfare. While the rents received by the Land and Housing Corporation have crashed, the cost of managing housing stock is increasing. The maintenance of public housing is increasing because there is no new investment and the housing stock is mainly older properties. The disgraceful shortfall in public housing maintenance in 2011 alone amounted to a backlog of $300 million. The small problems are getting bigger and the cost of housing is increasing. The problem the Minister must address was highlighted clearly in the Auditor-General's 2013 report, which stated that State governments were selling more stock than they were building. We urgently need to address this issue.

This Government's response was not to sell as many houses as Labor did but to sell high-value houses. This Government cleansed Millers Point and turned it into an enclave for the rich. The income it received was not used to build more public housing but to fill the funding shortfall in the Land and Housing Corporation. Homes are being sold to fill the gap between the money received from the sale of properties and the costs of managing the system. I encourage members to read the Auditor‑General's 2013 report. We are chasing our tails and cannibalising stock. We must have a fundamental break from this practice and invest in public housing. This bill is a symptom of a broader problem.

When the issue of public housing is confronted, there is cognitive dissonance. We hear, "They are protesters", or, "They have been offered a house." Members should talk to these people and ask them what they have been offered. Have they been offered full-time permanent housing? No. As I have demonstrated, people have to wait years to be offered permanent housing. Instead, people are being offered temporary permanent housing and they are pushing out others on the social housing waiting list. They are being housed in either short‑term accommodation or hotels. Members should talk to representatives of FACS in their electorates and ask them what they do to house homeless people. Ring a women's refuge and ask them what they do. They will tell members that they do not have the properties to house people.

This bill is a missed opportunity. We should be talking about proper investment. People on waiting lists in regional and rural New South Wales do not have the support of city services such as charities and faith-based organisations. It is more difficult for people in rural and regional New South Wales. This bill cannot be supported. It is a response by the Government to an issue it sees as a political problem. Homelessness should be addressed in a compassionate way. I encourage the Minister and this Government to seize the opportunity. They must read the Auditor-General's 2013 report and speak to people who work in homelessness services. They must give FACS and the non-government sector the tools they need to respond to this issue adequately so that they can treat homeless as human beings, not as a social problem that must be overcome by having police move them on.