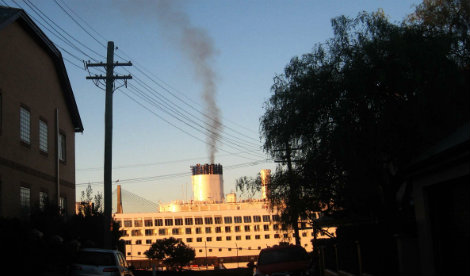 Jamie Parker MP has revealed that six cruise ships have been issued with noise warning notices at White Bay Cruise Terminal since the government introduced its Noise Attenuation Strategy in October 2018. One ship has forfeited their $11,000 ‘good neighbour’ bond.

Mr Parker says that in that same period three international ports have made shore power commitments making Sydney the top global attraction for the cruising industry’s oldest and dirtiest ships.

“In just four months, more than six ships have been issued warning notices as a result of excessive noise and at least one vessel has been forced to forgo their $11,000 ‘good neighbour’ bond.

“Years of community campaigning has forced Sydney Ports to introduce the current noise standards and just 16 weeks in they are already being breached regularly and repeatedly.

“When the former Labor Government bypassed local planning laws to approve this development, it was clear that this residential location was inappropriate due to the noise and pollution from these vessels.

“The only long-term solution to the noise and air pollution problem created by these ships is shore power.

“Shore power is now the norm in many port cities with China, New Zealand and Greece all planning to install new facilities.

“As long as this government refuses to install shore power the cruise ship industry will continue to send their oldest, dirtiest and most polluting ships to Sydney,” he said.

“The sad truth is that cruise ships in Sydney Harbour are making us sick, and they really don't have to.

“Our government is lagging behind the rest of the world and Sydney Harbour has become the dumping ground for old cruise ships which emit toxic diesel fumes. These fumes are classed as a group 1 carcinogen by the World Health Organisation putting them up there with mustard gas and asbestos.

“We have lived the last six years breathing in a deadly cocktail of toxins which have been causing asthma in our kids, respiratory and other cardiopulmonary problems, eye irritations and debilitating headaches,” she said.