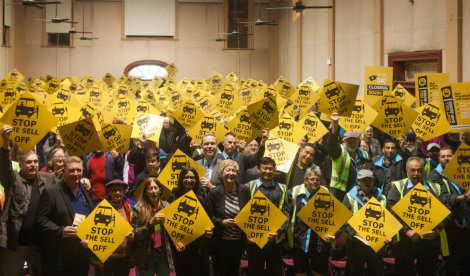 THOUSANDS of passengers signed a petition opposed to the state government’s plan to privatise State Transit buses across the inner west.

As part of a Commuter Day of Action organised by the Rail Tram & Bus Union, about 5,000 signatures were collected from passengers worried that fares will rise and services will suffer under the government’s franchise deal.

Bus drivers and volunteers were at 18 of the city’s busiest bus stops during last Wednesday’s morning peak to urge bus commuters to oppose the privatisation.

In May Transport Minister Andrew Constance announced that bus routes in Region 6, which includes the inner west, would be franchised to the private sector.

Mr Constance said while buses, depots and drivers will be controlled by a private operator, the government would still regulate the fares and set the timetables.

He said bus reliability and punctuality would improve.

Rail Tram and Bus Union volunteer Trent Hunter collects signatures, at Railway Square on Broadway, for a petition calling on the NSW Government to halt the privatisation of State Transit buses in the inner west.

“Once members of the public are told what’s actually happening to their bus services, like our bus drivers, they feel angry and betrayed,” Mr Preston said.

About 300 attended a meeting at Leichhardt Town Hall, hosted by Greens Mp for Balmain Jamie Parker, to protest the state government's plan to sell off State Transit bus services in the inner west

“After the unprecedented turnout at our public meeting, there’s no doubt that this is an issue local people are very passionate about,” Mr Parker said.