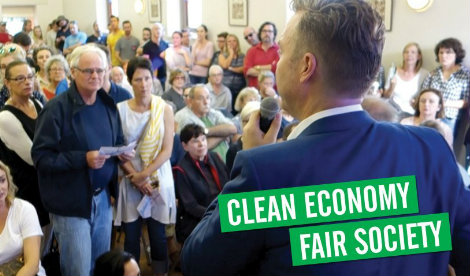 "I understand the increasing anxiety in the community and emphasise with residents who don't know if their home may be acquired or whether they will end up living next to a tunnel exhaust stack," said Mr Parker.

"I have committed to keeping our local community informed of the issues as they emerge. The spectre of compulsory acquisition of homes looms large. It is also likely there will be a pollution exhaust stack near to each of the four tunnel portals.

"This motorway will destroy homes, parkland, public finances and air quality for a travel saving of less than ten minutes. The Liberal State Government needs to put a halt to this project and instead invest in better public transport. It is important that Labor also repudiates their support for these major toll projects and not simply criticise the process.

"We do have some cause for optimism. The Glebe community defeated a proposed motorway in the mid-1970s. The former Labor Government's CBD Metro was scrapped in the mid-2000s following consistent and vocal opposition. More recently in Victoria, the community extracted a commitment from the incoming government to tear up the contract for the Melbourne East-West Link. People power can achieve results -- and there is collective action happening all over the inner west.

"I encourage everyone to sign the petition to scrap WestConnex and invest instead in better public transport," said Mr Parker.